Our Special Thanks to long time volunteers and performers, Linnell Hinchey and Barbara Keefe. 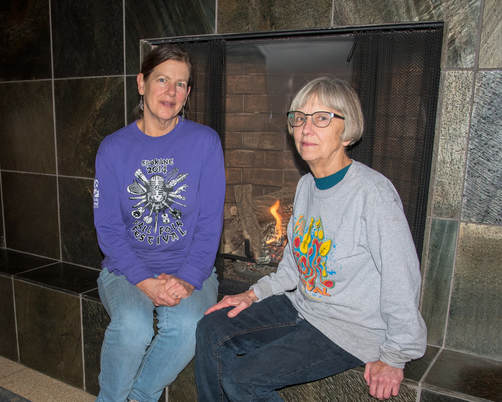 Special thanks to long time volunteers Linnell Hinchey, who has volunteered at every Fall Folk Festival, and to Barbara Keeffe, who only missed the first Festival.

Linnell Hinchey’s dedication is witnessed in the many hats she has worn, starting as a helper in Kid’s Craft Room. After she joined the Festival committee, she began organizing the Kid's Craft Room activities along with Vickie Ball, one of the founders of the Festival, and Maureen Koffman. Later she switched jobs and became the volunteer coordinator. Over time, she picked up several other jobs including T-shirt printing, donation buttons assembly, and being in charge of all the signage. These duties naturally led her to run the setup and takedown tasks -- a job that she continues to do. For at least 15 years, Linnell has called the fall “Festival Season,” because of the all-consuming nature of her activities involving the Festival. She says, “It’s a wonderful event that I have always been proud to be a part of. “

Barb Keefe is a petite women, but oh, so strong, when lifting those urns of coffee! As Ms. Hospitality, she cheerfully keeps the hospitality room filled with tasty foods to energize volunteers and performers, while making sure the coffee flows for all. Barb prepared soups and breads, and helped with set up in past years. Barb lives across the state, so she “enjoys her yearly meeting with friends to provide families unique cultural programming that they may not have had an opportunity to experience.”​