If You Missed the Live Broadcast, Listen Here ... 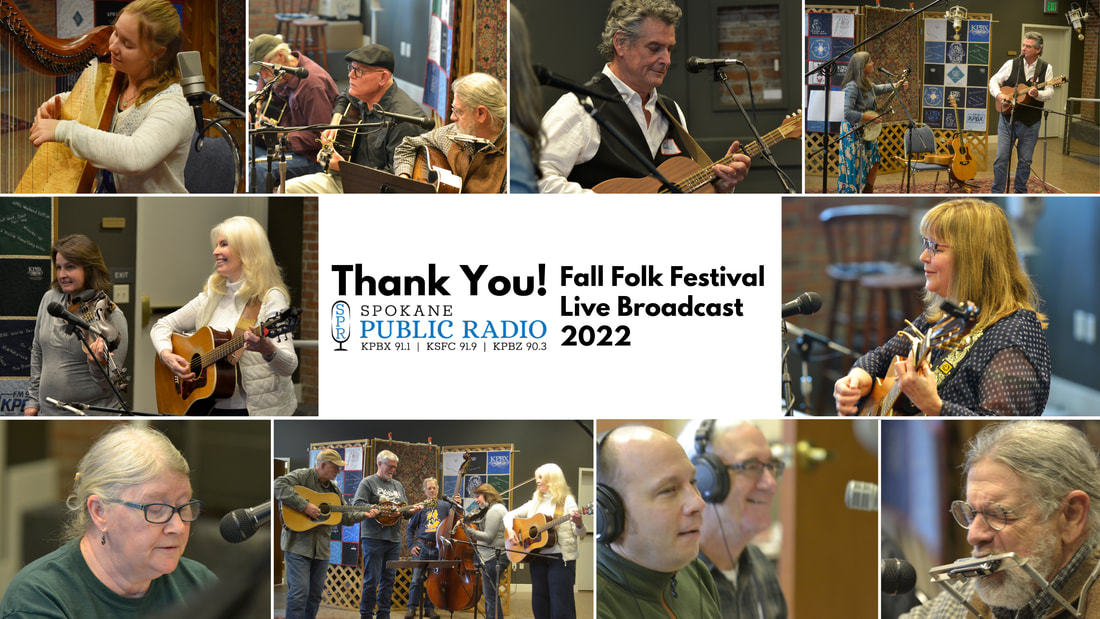 Bridges Home
Bridges Home is Tami Belzer-Gunter and Dave Gunter - dual lead vocalists and multi-instrumentalists who share their passion for music with audiences in venues that range from intimate, small-town theaters to large festival stages.

With their popular transition to theater concerts and main stage shows, Bridges Home has placed a new emphasis on audience pleasing originals and the stories that inspired them.

Cheryl Branz
Cheryl Branz is a second-generation business owner here in Spokane. You might better recognize her maiden name of Custer (as in Jim Custer Enterprises, Inc.). Her family has been promoting consumer shows at the Spokane Fair & Expo Center for over 45 years.

When Cheryl is not promoting shows, you’ll find her promoting her music. She performs as a singer/songwriter throughout the region with her acoustic guitar, versatile voice and engaging personality. Her songs cover a wide variety of styles and themes from the heartfelt to the hilarious.

Hunter Koss
Hunter Koss is a solo harpist who performs Celtic and traditional folk music. She brings the musical strings of a Celtic lever harp to life. She favors Celtic, folk and traditional tunes. Hunter’s original compositions and musical ideas are inspired by deep connections with family, friends, life experiences and the natural beauty of the Inland Northwest she calls home.

Hunter aspires to be a professional harpist, and she dreams of being a popular stage performer. Along the path of making her dreams a reality, Hunter has been honored to perform at many locations in the region; this includes hospitals, professional offices, conferences, schools, the VA Home, Union Gospel Mission, Sandpoint’s Panida Theatre, Scottish Highland Games, Spokane Interstate Fair, private gatherings and other special events. It is always a guess to say who enjoys her performances more: Hunter or her captivated listeners.

Keeler, Melvin and Morse
Brad Keeler adopted a cheap string acoustic guitar at the age of 15. Since then, he has performed in all corners of the country. Somewhere along the way he learned bottleneck slide guitar, lap slide guitar, mandolin, banjo, fiddle, bass, harmonica, washboard, jug, and even a little piano.

Laddie Ray Melvin is a singer/songwriter who has played music in the Pacific Northwest for many years. As a songwriter, he carefully crafts his lyrics and surrounds them with music from American folk tradition.

Lucy D. Ford
Lucy D. Ford had been a writer all her life, but thought of it as just a fun hobby until the late 1990s. She made her first sale, a children's poem, in 2000. Since then, her poetry and short stories have appeared in magazines such as Boys' Life, Ladybug Magazine and Babybug Magazine. She is a past regional advisor for the Inland Northwest Region of the Society of Children's Book Writers and Illustrators, International.

In addition, she has published her fantasy novels through small presses and as an independent author. Her current project is a high fantasy novella series, The Minstrels of Skaythe.

Monroe Bridges
Monroe Bridge band members have been playing music together at shows, festivals, and fairs throughout the Pacific Northwest. They share a deep love of the traditional bluegrass music of Flatt & Scruggs, the Stanley Brothers and, of course, Monroe. Individually, the members are experienced musicians and have played bluegrass and country music in bands throughout the land before coming together in the Inland Northwest in 2018. Today they perform a finely honed blend of traditional, contemporary, and original bluegrass, country and gospel music. With tight vocal harmony and dynamic instrumentals, we think you’re sure to love this band. Whether you are young, old, or in between, you will have a great time listening to Monroe Bridge!

Noel Taggart on mandolin has gained a reputation as one of the finest lead vocalists around. Kent & Karen Riggs are on guitar, singing lead and harmony vocals. Jean Ballhorn on fiddle is a veteran of the Colorado bluegrass scene and has performed and recorded with Charles Sawtelle, Open Road, Camptown and many others. Dan Gore is a versatile multi-instrumentalist. He has played mandolin and guitar in several bluegrass bands in the region and has produced the annual Spokane Mandolin Congress. Dan is playing bass fiddle for Monroe Bridge.

Decades of dedication and love of performing music led to King's expert musicianship, with a mix of contemporary, jazz, show tunes, classical, pop/rock, and big band swing. Steven covers dance music from the 1920’s through present day, and makes the music compelling whether playing solo or leading his band.