Welcome to our New Performers 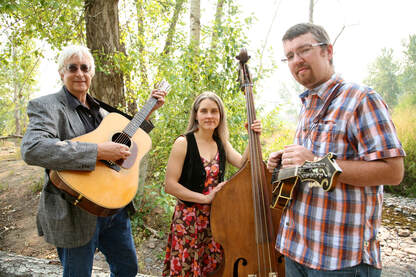 After years of performing in popular bluegrass bands in the regional scene, longtime collaborators Richie Reinholdt and Chad Fadely formed the Acousticals in 2000 as an outlet for their growing catalog of original material. They put out multiple CDs and played the circuit while honing their craft and writing more cool tunes.

Meanwhile in Fairbanks, Alaska, young folksinger Britt Arnesen was listening to the CDs. She liked them so much that she moved to Montana to study bluegrass and become good enough to join the band. Years of enthusiasm and hard work later, she has become an integral member, contributing “buttermilk” harmonies and fan-favorite songs of her own.

With new energy, the Acousticals have been growing to reach audiences around the Pacific Northwest. Their newest CD, The Fishie, was recorded live during a single Tuesday morning session in Missoula. The live CD has been welcomed by fans and allows potential audiences in on a complete unedited set of fine pickin’ original bluegrass tunes. The entire session was filmed and is viewable online. 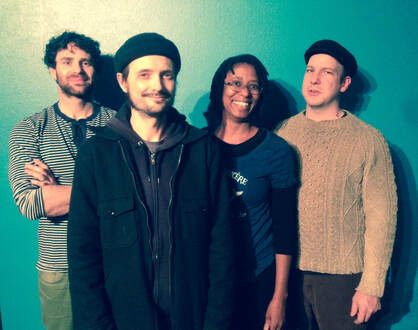 Bigger Boat
Bigger Boat (Moscow, ID) has been blasting northern Idaho with traditional sea shanties and maritime songs since 2014. The band is comprised of Rochelle Smith, Ben James, Rob Ely, and Dylan Champagne. We invite you to sing with us! 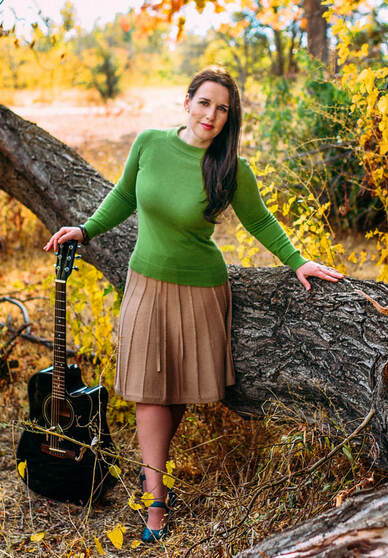 Talena Bricker
Talena Bricker (Richland, WA) is a singer-songwriter, playing acoustic guitar. She travels the Pacific Northwest as inspiration for her music.

As a Pacific Northwest native and indie-folk musician, Talena Bricker has taken her time sharing her work. This singer-songwriter spent years working on her craft, but rarely shared it. For 15 years, she played guitar and wrote music, studied poetry, and even played with a couple local bands. However, her need for privacy took priority over her love for making and sharing music. Finally, she found herself writing songs that compelled her to look deeper into the worth of these fears, and driven by her music and the countless artists who influenced and inspired her, she started performing around her Richland, WA, home.

Talena is now branching out and doing shows around the Pacific Northwest. She also recorded her first EP, “Drowning,” released in January 2018, at Sound Forge Studios in Richland, WA, produced by Jason Vorpagel. Ear To The Ground music blog calls Talena "a contemplative singer songwriter with command of the acoustic guitar. Her lyrics are often poetic and thoughtful." In addition, When The Horn Blows says, "Bricker's captivating vocal spills vivid poetic lyricism amongst delicate and consoling arrangements."

Stemming from her Pacific Northwest roots, Talena’s songs and voice reflect her environment perfectly. Mysterious sounds, dark and sun-dappled as the old-growth forests. At other times, they are powerful waves breaking on a deserted and painfully picturesque coastline. Moreover, it always includes the coolness and the kind of melancholy that comes from 300 days of cloudy or rainy weather each year. Her music has been called ethereal and haunting, and compared to artists such as Nick Drake, Elliot Smith, and Iron and Wine. Her songs explore the themes of choices, loss and overcoming fears, just as she navigates these themes in her own life and musical career. 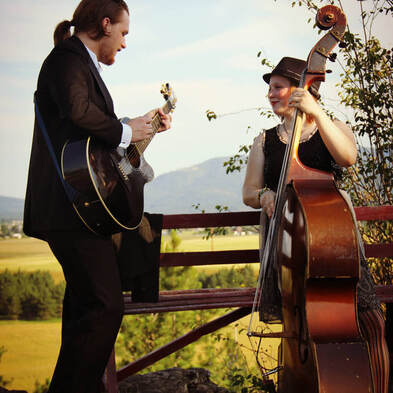 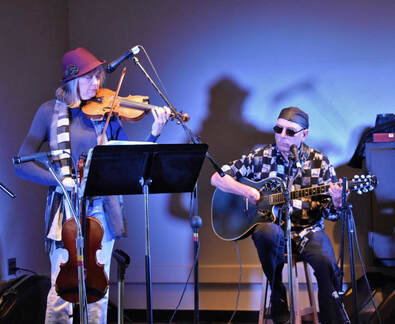 Kristi, originally from Montana, plays violin, viola and soprano vocals. She’s worked in orchestras as a violinist and choral singer, and has, for many years, played in old time fiddle and country folk music groups. She certainly knows her way around the great American songbook too.

Pat, originally from Chicago, is a multi-instrumentalist and vocalist who earned a living playing music all over the U.S. & Canada. He is regarded as an exceptional, even influential, guitarist and performer. He has a deep interest in many musical styles, is an avid music collector and the world's friendliest recluse.

“Ya gotta see 'em live...and they don't get out much. So here's your chance!” 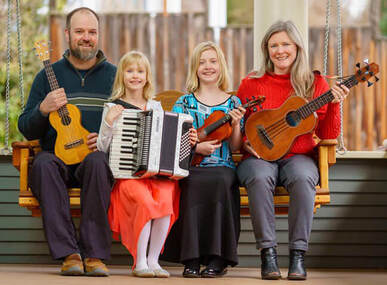 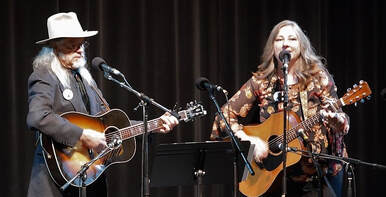 They perform Americana, folk, country, bluegrass, blues, standards, as well as originals rooted in those styles.

Brad and Jackie bring a new twist to long-beloved and widely known songs across the musical spectrum. Their unique vocal arrangements make both their covers and originals into a one-of-a-kind musical experience for listeners of all ages. 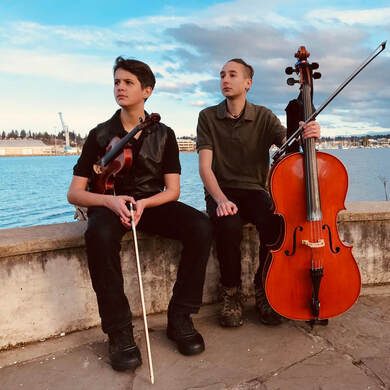 Dante and Eros Faulk
Dante and Eros Faulk (Olympia, WA) have been playing music most of their lives, both picked up a string instrument at the age of three. Today, the teen brothers are both multi-instrumentalists. In addition to cello and fiddle, they play guitar, Bodhran (Irish drum), tenor banjo, Cajon (box drum), shruti box, kick-drum, ukulele, mandolin and on occasion, the sing.

Performing, recording and arranging are their favorite things to do. They are passionate about audio engineering and stage sound. They recorded their debut album, Beirt, in 2017 – it was released on Green Monkey Records. They continue to record a variety of complex multi-tracking tunes in their home studio for online release.

Eros develops the set lists the duo performs. He has quickly become an expert historian on traditional folk tunes and artists and wrote the liner notes for the album. In addition to performing, Dante teaches private “traditional cello” lessons locally, and has been holding cello workshops at local festivals.

They can be seen and heard in private and public events, local markets and festivals. They appeared at the Oly Old Time Festival, Bellingham Folk Festival, Olympia Fall Arts Walk, NW Folklife Festival, Wintergrass and The Washington Center for the Performing Arts Young Arts Ambassador Showcase. They have opened with their band REDS, for the acknowledged masters of the field, the Scottish/American duo Alasdair Fraser and Natalie Haas, as well as world renowned duo, Newgrass masters Darol Anger and Rushad Eggleston. They shared the stage with Irish sensation We Banjo 3, and the stellar Scandinavian group, SVER.

Dante and Eros’ Beirt is an inspiring first step in a long journey for two talented young men. Expect to hear much more! 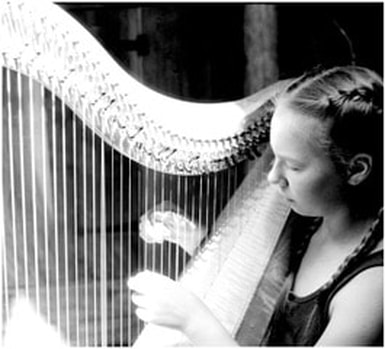 For centuries, audiences have enjoyed the magic and song of the harp. This beautiful instrument can trace its origins through time and cultures. Ireland, Scotland, the Far East, the Middle East, ancient Egypt and ancient Mesopotamia are just a few.

Within this context of a harp’s rich tradition and enduring appreciation, Hunter Koss brings the musical strings of a Celtic lever harp to life. She favors Celtic, folk and traditional tunes. Hunter’s original compositions and musical ideas are inspired by deep connections with family, friends, life experiences and the natural beauty of the Inland Northwest she calls home.

Hunter aspires to be a professional harpist, and she dreams of being a popular stage performer. Along the path of making her dreams a reality, Hunter has been honored to perform at many locations in the region; this includes hospitals, professional offices, conferences, schools, the VA Home, Union Gospel Mission, Sandpoint’s Panida Theatre, Scottish Highland Games, Spokane Interstate Fair, private gatherings and other special events. It is always a guess to say who enjoys her performances more: Hunter or her captivated listeners.

Now a teenager, Hunter has played the harp since eleven years of age. Who knows? If she is blessed with a life of good health and longevity, she may be one of the privileged to give the harp its next century of existence. 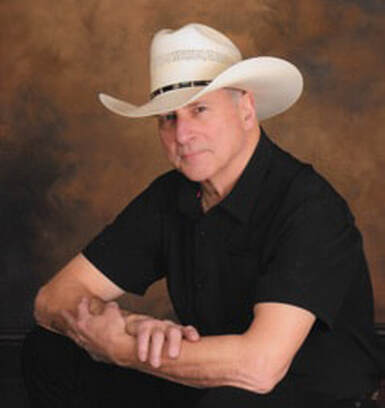 His music career gained direction as a boy, listening to his father in church choirs and solo performances. He has toted his guitars and performed on stages at coffee houses, pubs, folk festivals and home concerts for over 40 years.

His latest work reflects his Americana folk roots, to include love songs, Blues and country ballads.

In his new song, “Your World,” he can be heard giving fatherly advice to his youngest daughter, while in her teens. Advice on where happiness is in life, a lesson many can relate to.

In another song, “My Memory’s Frozen,” Larry addresses his high school friend who returned from the Vietnam War with PTSD.

Larry shows off his ability to play both guitar or mandolin, and harmonica in many songs. He also uses alternate tuning to give variety in his performances.

Larry says, “I hope you enjoy my latest work, from some of 75 written in the last three years, where I gathered my song writing inspiration from the spirit of Bob Dylan and story telling ‘about real people,’ as in Jim Croce’s compositions.” 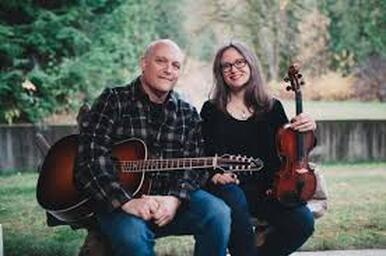 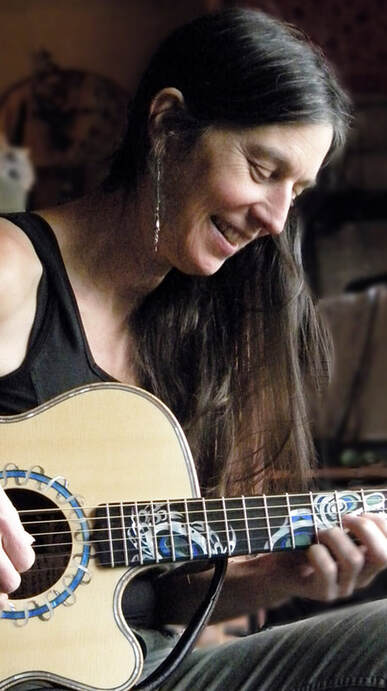 Tracey Spring
Tracy Spring (Bellingham, WA) provides rich, compelling vocals and versatile guitar playing. She is a writer of 4-minute novels, poetry and music all rolled into one.

Tracy has won multiple regional awards for her singing and songwriting. She displays a style all her own while combining blues, swing, old R&B, jazz and folk. She is a seasoned performer known for her compelling vocals and versatile guitar playing in folk venues and festivals throughout North America and Australia.

Tracy’s songs “Sometimes Angels,” “Somebody’s Child” (co-written with Becca Christel), “In Our Hands” and “What Would You Give To Change the World” have been used for soundtracks promoting philanthropy, raising funds for thousands of charitable organizations.

In addition to these humanitarian anthems, she co-wrote (with Janis Carper and Becca Christel) “Of This World,” recorded by Peter, Paul & Mary on their 2004 studio album, In These Times.