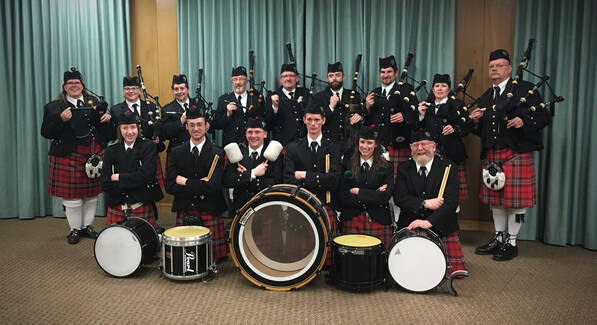 The Angus Scott Pipe Band was formed in late 1955 is one of the oldest continuing pipe bands in the Northwest.

The band was named in memory of Pipe Major Angus Scott of Kimberly B.C. His enthusiasm and support for the project was very influential among the Scottish community in the Inland Empire.

The band was fortunate to have begun under the tutelage of Pipe Major Geordie Mars, formerly of Victoria, B.C. His reputation as a teacher and piper is unsurpassed in this area. Although Pipe Major Mars taught many top-level players, his most notable student was Pipe Major Sandy Jones, formerly of the Citadel, Charleston, SC.

Prior to his 25 years at the Citadel, Sandy was Pipe Major of the United States Air Force Pipe Band.

Pipe Major Mars had the band playing as a unit within the year of its formation, and they were soon out fund raising for uniforms and equipment. As one would expect, the band chose the Scott tartan, a distinguished pattern dominated by red and accented by green and white lines.

By early 1957, the pipe band was fully outfitted. One of their first performances was at Fairchild Air Force Base, and performances there have remained has been a tradition ever since.

In succeeding decades, the ASPB has performed at numerous functions throughout the Inland Empire and the Washington state. Aside from competing at various Highland Games over the past four decades, there were two memorable experiences. The first was performing at the 1962 Seattle World’s Fair and then at Spokane’s Expo 74.

The next year, 1975, saw the formation of a Junior Pipe Band under the direction of Vi (Campbell) Wallace, formerly of Kimberly, B.C.
​
The Junior Pipe Band became a feeder band for the ASPB. For several years, The Junior Pipe Band kept the ASPB supplied with young and eager players. Vi was also responsible for fostering Highland Dancing in this area, producing many top award-winning dancers. These traditions carry on to this day.